The team at Atlantic Beef is working hard to enhance the business and provide greater value to the Maritime beef industry.  With the cattlemen’s associations of Prince Edward Island, Nova Scotia and New Brunswick, the team is developing new relationships and new models of partnership to go forward and plan for a thriving beef industry with all the advantages that will provide to local farmers and the greater community.

Here’s an article from peicanada.com

In a bid to attract more dairy cull cows from across the Maritimes, Atlantic Beef Products Inc is making some changes to its pricing formula.

Company president Russ Mallard explained the majority of the cull animals are now shipped to Quebec for processing and the company commissioned a study which indicates keeping those animals here could add another eight million dollars to the Maritime economy.

It would also mean another major step along the road to profitability for the region’s only federally inspected beef plant. Mallard said they currently offer two options to dairy producers seeking to sell their cull animals. Leaner animals can be sold for ground beef production while heavier animals can be raised like a fatted beef calf and be processed as premium beef, provided the animals are raised according to protocols established by the company.

However, there is a catch. Dairy animals have been penalized 15 cents per pound compared to premium beef cattle. Effective June 13, the penalty was reduced to seven cents a pound and the company president is hoping that will convince more producers to sell their animals in the region.

Mallard said the move is part of an overall effort by the plant to convince more Maritime producers to sell to the facility. While the plant may be regional in nature, Mallard said approximately 90 per cent of the animals processed come from PEI. He noted Bruce Andrews, who is the manager of beef procurement and logistics, spends a good deal of his time on the road travelling throughout the region meeting producers ton their farms.

“We are making some inroads,” Andrews said. “I am getting a good reception and people want to know more.”

Mallard noted the plant recently received an A certification from the British Retail Council for the third year in a row. The council is a leading safety and quality certification program, used by over 22,000 certificated suppliers in 123 countries, with certification issued through a worldwide network of accredited certification bodies.

“Scoring an A on the BRC audit is a significant accomplishment for our team and demonstrates our continuing commitment to quality for our customers,” said Mallard. “It will open doors to new markets and customers who insist on a high score on a BRC audit.”

An Island native who was on the board of directors before assuming the president’s job, Mallard is convinced the plant is on the road to profitability. They had a sales volume of $52 million last year, adding most of the sales are off Island. The company sells under the Certified Island Beef and Island View Farms lines for the retail market and Blue Dot Reserve for the restaurant trade.

The company president said the plant has a workforce of approximately 100 and processes 400-500 animals a week. That is close to the level envisioned when the plant opened, and he said having the plant headed in the direction of profitability is good news for the entire industry and the Island economy in general. That includes Island taxpayers, as the amount of government support has been falling as sales increase.

“We want as many animals coming through here as we can get,” he said. “Every kilogram of meat we process brings us that much closer to profitability .” 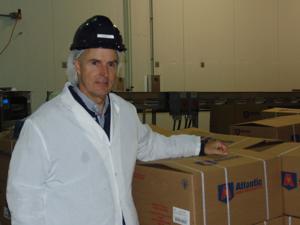 Company president Russ Mallard looks over production at the Atlantic Beef Products Inc plant in Albany. He said the company is now on its way to profitability, conducting over $52 million in sales last year and processing an average of 400-500 cattle a week.